Read “The Continuum of Jazz” from Where Y’at magazine

Thanks again to Laura Tennyson, Communications Strategist for the New Orleans Jazz Orchestra for arranging this interview and to Josh Danzig and the staff at Where Y’at magazine for the assignment. Photo credits: Romney Photography 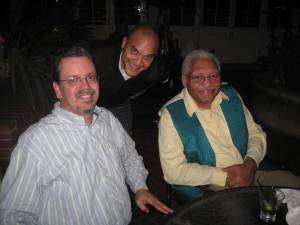 If those of you living outside of New Orleans want to know why natives like me love it here, one reason is the plethora of and accessibility to great artists. The artistic ability per square mile in this city is astounding. I wrote an article that will appear in local entertainment publication Where Y’at magazine during New Orleans Jazz Fest in late April/Early May, and had a chance to interview legendary jazz musicians/educators Ellis Marsalis, Harold Battiste, and Irvin Mayfield.

I never get tired of speaking to great musicians and artists, particularly about the creative process and the courageous nature of developing your artistic gift in the face of daunting challenges. Here’s an excerpt from my interview – a quote from Irvin Mayfield, Artistic Director of the GRAMMY Award-winning New Orleans Jazz Orchestra and of the New Orleans Jazz Institute at the University of New Orleans, regarding his esteemed predecessors in jazz and music education:

“Nobody starts to play basketball because they had a great coach. They play basketball because they saw Michael Jordan. As much as I have respect for all of the classroom time that these gentlemen (Marsalis and Battiste) have spent, I would never have been interested in them if they couldn’t play. We call these guys educators, but was Louis Armstrong any less of an educator? Was Cannonball Adderley any less of an educator? Was Miles Davis?”

(Pictured left to right, Myself, Irvin Mayfield, and Ellis Marsalis)

Thanks to Laura Tennyson, Communications Strategist for the New Orleans Jazz Orchestra for arranging this interview and to Josh Danzig and the staff at Where Y’at magazine for the assignment.

In the late 1950’s and early 60’s, the “Rat Pack” show at the Sands Hotel was the hottest ticket in Vegas. The group that eventually consisted of entertainers Frank Sinatra, Dean Martin, Sammy Davis, Jr., Peter Lawford, and Joey Bishop sang songs, told jokes, performed slapstick for laughs, and displayed various other forms of hijinks. But as those who were close to the action in those days tell it, the show was almost secondary. A seat at those shows was like an invitation to the greatest party on the planet.

The performers were having a blast, and you were now a part of their inner circle sharing in the fun.

Let’s take Louis Armstrong. Was there ever a moment that you watched him perform that you didn’t bel

ieve music was the purest form of joy on the planet? I think not.

That takes us to Cyndi Lauper. When she took the music world by storm in the 80’s, she came across as a quirky outsider with a flair for outrageous fashion. As her career progressed, however, she later became respected as a talented songwriter and musician, respected across musical genres. Her breakout hit? “Girls Just Wanna Have Fun.” Fans were drawn to Cyndi by her love of music, and they have followed her on her 25+ year journey (30 million in global record sales at last count)

There’s a lesson for music educators and educators in general – Ultimately it’s your love of the subject matter that will inspire your students.

Hollywood is at its best when it produces movies that inspire. With respect to movies about music and musicians, here are a dozen that inspire me:
1. The Fabulous Baker Boys (1989) (Jeff & Beau Bridges and Michelle Pfeiffer)
Jeff Bridges is one of my favorite actors and is extremely versatile. Characters seem real and the movie avoids relationship cliches and stereotypes that so often leave the viewer less than satisfied.
2. For Love or Country (2000) (Andy Garcia)
Garcia portrays Cuban trumpet player Arturo Sandoval. All musicians talk about how important our art is to us, but this movie makes you ask the questions, “How much do I really love music and what would I do to pursue it?”
3. Swing Kids (1993) (Robert Sean Leonard, Christian Bale)
Compelling story of a movement of young kids who used Swing dance and jazz as a form of rebellion against the Nazi movement in pre-WWII Germany.
4. Mr. Holland’s Opus (1995) (Richard Dreyfuss)
Some might find this movie corny or sappy, but I love it. The movie really captures the essence of what makes great music teachers great – The ability to reach into the core of each student individually and give them what they need and to grow as a musician and as a person.
5. Yankee Doodle Dandy (1942) (James Cagney)
The most iconic performance by James Cagney in his portrayal of Broadway legend George M. Cohan, especially when you consider that Cagney was known as a tough guy, gangster type in most of his movie roles.
6. The Buddy Holly Story (1978) (Gary Busey)
This movie captured the excitement of the early days of rock and roll. Though Busey’s career never lived up to its potential, he turns in a great performance here.
7. This is Spinal Tap (1984) (Christopher Guest, Michael McKean, Harry Shearer)
Every cliche of the ego-driven rock star is exposed here – some real laugh out loud moments and don’t underestimate the value of the musical talents of the leading actors here in making this movie work.
8. Walk the Line (2005) (Joaquin Phoenix, Reese Witherspoon)
It’s difficult to portray flawed celebrities in a way that makes you understand both why they were beloved and how they could be despised at times. This film “walks that line” wonderfully.
9. Coal Miner’s Daughter (1980) (Sissy Spacek, Tommie Lee Jones)
Like Johnny Cash, Loretta Lynn’s story had an unpleasant side (primarily her relationship with an abusive husband) that needed to be a part of the mix if the movie was to be credible. Likeable for many of the same reasons.
10. A Mighty Wind (2000) (Ensemble Cast)
It’s clear that the cast and creators of this movie, who have also put together a string of satirical films with a cult following (This is Spinal Tap, Best in Show, Waiting for Guffman) had a clear affinity for the folk music movement of the 1950’s and 60’s while understanding how the personalities easily lent themselves to jest. Heartwarming and funny and not far from an accurate portrayal of the mindset of the folk musician.
11. The Five Pennies (1959) (Danny Kaye, Barbara Bel Geddes, Louis Armstrong)
Danny Kaye was one of the most likeable and engaging celebrities on the screen or off. Movie features a fun performance by Louis Armstrong.
12. The Blues Brothers (1980) (John Belushi, Dan Aykroyd) Though the movie resorts to car chases and the storyline gets slow at times, this movie stands the test of time for 2 reasons: a plethora of cameo appearances by legendary blues & R&B musicians; and the chemistry and playfulness of the lead actors in their most lovable and enduring roles/characters.

In this month’s Where Y’at magazine, my interview/profile of Irvin Mayfield, Grammy-winning leader of the New Orleans Jazz Orchestra and the cultural ambassador of New Orleans, among other accomplishments.

Here’s my favorite excerpt:
“We need to take a serious look at what being educated really means. The mandate has to be across the board that in New Orleans, every kid is going to know the sound of Louis Armstrong’s trumpet and the recipes of Leah Chase. Those things are not less important than what Hemingway wrote. A dish, a word, and a sound are equals.”

Link to the complete article.

Wynton Marsalis’s album He and She is music interspersed with poetry, and a poignant take on relationships and romance. In this excerpt from an interview with Achievement.org, Marsalis discusses the respectful approach that jazz takes toward courtship:

“There is so much in jazz music to be studied and to be learned, and so little education. I could go on and on and on, just about what Duke Ellington did. And, also the romantic connotations of the music. The music had the effect of liberating a lot of the people from this Victorian image of sexuality. But, for some reason people still think they need to be liberated from that. This is something jazz music was doing around the turn of the century. And, now it’s degenerated in the modern era to the type of vulgarity that is represented by rock and roll, which parades under the guise of giving you sexual freedom, when it’s really, truly, sexual repression.

“Sexual freedom is found in the sensuality and the romance and the lyricism of the great songwriters like George Gershwin and Cole Porter and Duke Ellington, and of the great instrumentalists like Louis Armstrong and Lester Young. These people had a truly romantic conception that was based on elevation of the relationship between a man and a woman, rather than the denigration of it into just some abusive adolescent sexual discoveries.”